Girls on the Run of Northwest Indiana is a nonprofit organization that helps young girls to develop healthy habits, improve their self-esteem, and learn about work ethic and perseverance through a fun, after school program. There are clubs at schools across the region, including three in East Chicago.

East Chicago Lighthouse Charter, East Chicago Urban Enterprise Academy, and McKinley Elementary are the three East Chicago schools that offer Girls on the Run to their 3rd – 5th graders. The program was brought to the community through a grant from the Foundations of East Chicago (FEC), which covered the registration fees of all East Chicago girls willing to participate.

“Knowing that somebody believes in the girls enough to give us the money to have this program, that means a lot,” said Hermelinda Gomez, Girls on the Run coach and faculty member at McKinley Elementary.

A visit to the McKinley Girls on the Run club on May 18 revealed what the girls’ experiences with the program are like. They meet for two hours after school on Tuesdays and Thursdays for 10 weeks. To start, the girls all went outside to stretch together. Four participants took turns leading their friends in their favorite warm up activity. All of the girls counted aloud together as they held each stretch.

After they were warmed up, the girls began to run. They ran about 10 laps around the McKinley parking lot, chanting in unison, “Girls on the Run is so much fun!”

As each girl passed the starting point, they were excited to stop and see Coach Gomez to get a card. The purpose of the cards is so the girls can easily track how many laps they have complete. Each card also had a different motivational phrase written on it, to help the girls persevere through the end of the workout.

“I like that we do exercising,” said third-grader Randi Washington, whose favorite exercise is jumping jacks. “Exercising is actually very good for you.”

When they had completed their run, the girls went back inside to the McKinley cafeteria, where a special guest was waiting for them. The lesson of the day was how to make your own healthy snack at home and there to teach the kids was former professional pastry and culinary chef, Dina Celestin.

Under the direction of Dina, the girls learned how to make black bean and corn salad, a recipe that does not require the use of heat. Dina emphasized to the girls that, once they know how to cook for themselves, they can make whatever healthy dishes they want. Each child made their own serving of the salad, incorporating as much or as little of each ingredient as they wanted. They were also given plastic containers to take their snacks home to show their parents.

After they finished their snack, it was time to go home. Before they went their separate ways, the girls came together in a huddle. Everyone put their hands in and chanted once again, “Girls on the Run is so much fun!”

“The girls just love the friendships that they build at Girls on the Run,” said Coach Gomez.

To learn more about Girls on the Run and other organizations benefiting youth in East Chicago, visit www.FoundationsEC.org. 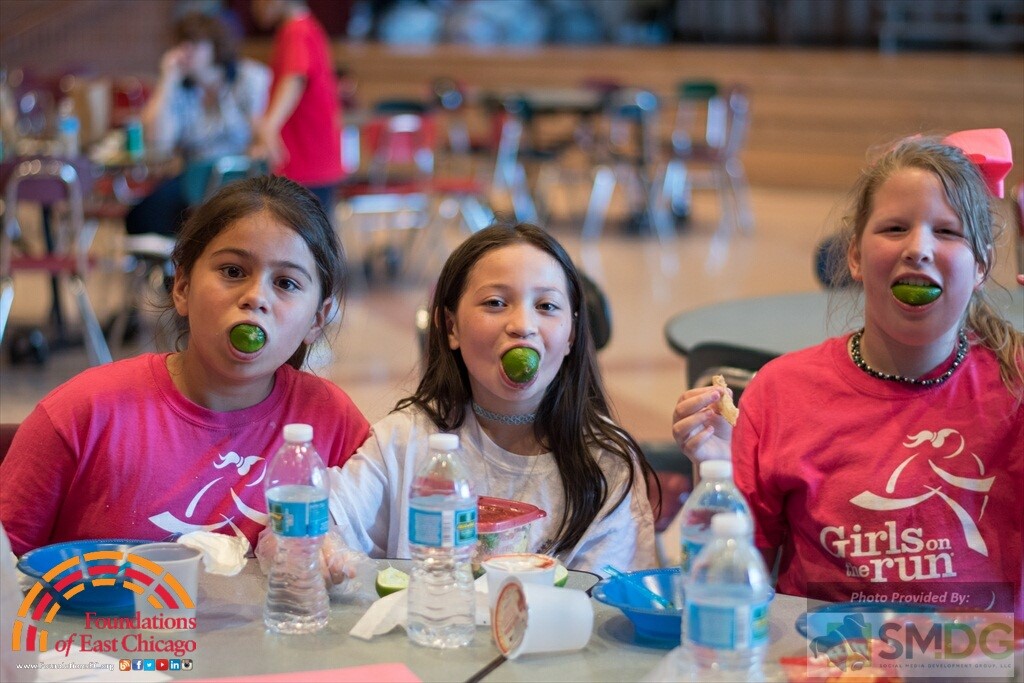