The East Chicago Police Department has made it its mission to not only protect and serve the people of East Chicago, but also to open the lines of communication and develop trust between citizens and law enforcement officers. One way that the department is working to do this is through its Citizens Police Academy.

The ECPD started the Citizens Police Academy in 2013. The 18 individuals in this class met once a week for eight weeks. At these meetings they observed presentations regarding how investigations are conducted, how crime scenes are processed, how to deal with gangs and other things that ECPD officers handle on a daily basis.

A graduation ceremony was held for these individuals. Afterwards, the graduates were asked to continue to be ambassadors for the ECPD in the community. Many have done this by assisting with the Day With Our Youth event, organizing crime watch groups in their neighborhoods and going on security walks with officers.

Due to its success, the ECPD brought the program back in 2014 with the assistance of FEC funding. The 2014 Citizens Police Academy class consisted of 15 individuals. These participants were able to use a simulator machine to see how they would react in situations where they have to make split-second decisions, much like ECPD officers have to do on a regular basis.

This activity allowed the participants to use a modified gun, mace or taser to respond to simulated dangerous situations. Many participants enjoyed this activity and said that it really opened their eyes to the situations that police officers face every day.

The ECPD continues to offer this program as a means of communicating and working with the people of the community. By getting to know the residents, officers can find out what it is that they need from law enforcement to make East Chicago a safer place. 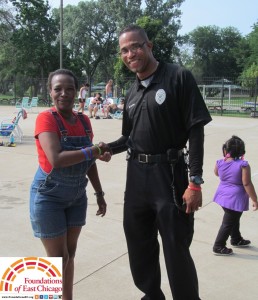