In the midst of everything that is going on in our world right now, Foundations of East Chicago (FEC) would still like to spread a bit of joy and highlight one of our many scholarship recipients. Chavon Carroll, formerly Chavon Mitchell, graduated from East Chicago Central High School in 2001 and received the FEC scholarship for her four years of higher education. Chavon attended Xavier University in Cincinnati, Ohio as a Communication Major. She concentrated on Public Relations and minored in Spanish. 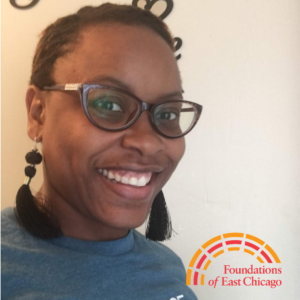 Like majority of our scholars, Chavon credits FEC for helping her financially throughout her college years. However, her remarkable feat, that not many accomplish, is graduating loan debt free! She says, “The Foundations of East Chicago provided me with the financial support I needed to successfully complete college with very little financial stress and burdens. Thanks to their generosity combined with scholarships received from my university and my parents’ hard work and sacrifice, I was able to graduate in four years with no student loan debt and on solid financial footing.”

Chavon was very blessed in having a great support system to aid her in this sometimes-daunting process. “While I credit my college, my support system and my family with how well I performed in college, I also credit all of my scholarships, including the Foundations of East Chicago scholarships. I saw the burden that many of my peers felt when they had to worry about how or if they could afford the following semester’s tuition. I was so fortunate not to have that experience. While I held small odd jobs around campus to make sure I had spending money and money for food and clothes, I did not have to worry about paying for college, and that was a huge burden lifted off my shoulders. In addition, I’m not sure my parents would have been able to pay for much more out of pocket expenses if I hadn’t received so many different scholarships and grants that was able to make their contribution small enough that they could cover it. While I credit much of my success to the sacrifices of my family, my support system and the college I chose, I absolutely understand that the financial freedom I was able to experience because my academics were paid for was because of the generosity of Foundations of East Chicago.”

Through her four years at Xavier University, Chavon fully immersed herself in the college life. She states that her college experience was the most formative times of her young adult life. “I found my voice, my leadership and my confidence in my four years at Xavier University. I came out of my shell and became more comfortable and confident in both my academic skills and my leadership abilities. I was active in numerous clubs including the Student Activities Council, Black Student Association, Amnesty International, Gay/Straight Alliance, and more. I was able to excel academically and find my footing in leadership circles and gain life-long friends.”

FEC loves to hear from students such as Chavon who has used the scholarship received to its advantage and reach their full potential. Chavon works for a national non-profit, Teach For America, as a Senior Managing Director, Development Partner. In her role, she provides professional development and coaching support to a group of senior leaders across 12 communities (NE & SE United States), with annual fundraising goals totaling more than $44M. Her role is one of four across Teach For America’s national organization charged with building the skill and capacity of Executive Directors and Heads of Development to help them reach both their short-term and long-term fundraising goals, while also acting as a content expert and chief consultant for those responsible for fundraising results.

When asked to give a message to high school students thinking about applying to the FEC scholarship, she emphasized the following: “You should see this as a critical moment in your goal to get a higher education that will give you the economic mobility you and your family deserve. A college degree is one of the greatest equalizing forces in this country and is a key building block to the future you want and aspire to have. This scholarship will be one of many stepping stones for you on your academic journey – but it is a critical piece and is something you have some control over right now. So, seize this opportunity and take advantage of it now. Your future self will thank you for it later.”