Getting the Word out on Grace Beyond Borders

Home/Community, Programs Funded/Getting the Word out on Grace Beyond Borders
Previous Next

Getting the Word out on Grace Beyond Borders

When a non-profit organization is featured on the NBC Chicago news, it’s a big deal. Grace Beyond Borders was exceedingly grateful for the coverage they received last December, as it helped to reach a huge population in the entire Chicagoland area. 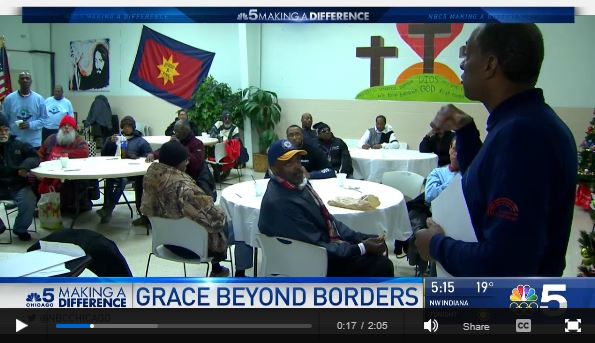 NBC’s LeeAnn Trotter visited Grace Beyond Borders’ Community Breakfast Forum and interviewed Marcus Martin, Founder, volunteers and the homeless. Having this kind of coverage is extremely important as it not only shows the dire situation of the homeless in East Chicago, but it also provides an opportunity for viewers to donate to the organization.

The Grace Beyond Borders program was established based on the need to break generational cycles of not just the homeless, but also drug addiction and poverty in East Chicago, while moving individuals from dependence to interdependence within the community. Those in need are provided with food, clothing and lodging. They minister to the total person- body, mind and spirit- with the goal of transformation and restoration.

However in order to do that, they must rely on donors. Having NBC Channel 5 feature the organization may allow donations to come from people who had previously never heard of them. Learning about the work they do, in addition to seeing the situation in East Chicago, may touch people in a way so that they consider donating to their cause.

Sadly, there are more than just a few stories the homeless had to tell on the video. Because East Chicago doesn’t allow the homeless to sleep on the street, they have to find other places to go. One man was on a porch, wrapped in a blanket. It was 19 degrees out. Another man said he and three others sleep in his car.

These stories show how important the work Grace Beyond Borders provides. And let’s face it, when watching the news it’s mostly terrible stories of robbery, murder and so on. Seeing such a wonderful organization doing good in their community is a breath of freshness that can remind you that there IS still good in this world.

To learn more about Grace Beyond Borders, click here.