Grace Beyond Borders makes a Dynamic Impact in East Chicago

Grace Beyond Borders makes a Dynamic Impact in East Chicago

On the morning of Tuesday, April 4, a group of East Chicagoans waited outside the doors of the Salvation Army East Chicago Corps. At 9 a.m. on the dot, a man opened the doors from within and those waiting went straight inside, as if they knew where to go.

Those at the Salvation Army that morning were some of the city’s homeless. They were there to attend a breakfast meeting, held by the nonprofit organization Grace Beyond Borders.

Grace Beyond Borders has been helping the homeless in East Chicago for four years. The organization offers programs that provide those in need with food, shelter, clothing, medical treatment, mental health treatment, social services and independent living skills. Grace Beyond Borders meets four times a week to carry out these missions.

Two of the four weekly meetings are for breakfast and discussion at the Salvation Army. At these events, the homeless not only have the opportunity to get a free breakfast, but they also can listen to volunteers and staff discuss organizational progress and upcoming events. It is Grace Beyond Borders founder Marcus Martin’s hope that these people attend as many events as they can in order to help them develop the skills to get back on their feet.

“Many of them need a hand up out of this situation and they struggle for months without the help that they need,” said Marcus. “We want to provide the healing and help restore lives so that they are independent.”

Grace Beyond Borders has been holding their informational breakfasts for two years, and these events have developed a reputation in the East Chicago homeless community. On April 4, the organization saw a new attendee. He stated that he had only been homeless for five days. He was talking with some of the other members of this community about finding a job and they recommended that he visit the Grace Beyond Borders breakfast for information on programs that could help him. While there, he got to speak with several volunteers who took his information and gave him a list of events that he could attend.

“Any time we help move a homeless person off the streets and into their own place, it’s dynamic,” said Marcus. “When you help one individual, it makes a change in East Chicago.”

To learn more about what Grace Beyond Borders has to offer needy members of the community, visit www.FoundationsEC.org. 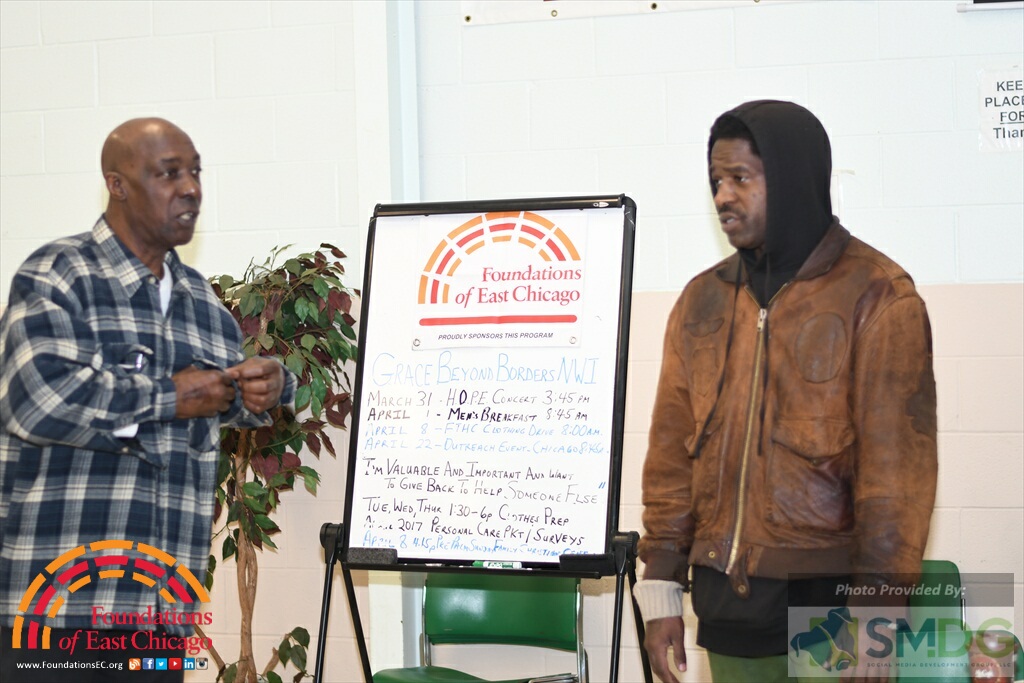