FEC and Food Bank of NWI Work Together to Feed EC

FEC and Food Bank of NWI Work Together to Feed EC

FEC has provided over $600,000 in financial support to East Chicago food pantries since the year 2000. The organization has been collaborating with the Food Bank of Northwest Indiana specifically since 2009 and has provided it with significant grants for the past two years.

In 2014, the Food Bank of NWI received a $15,000 General Operations Grant from FEC. This type of grant is awarded to nonprofit organizations in the area to help them take care of their businesses so they can keep helping people in the community.

The Food Bank of NWI also received a Program Grant from FEC in 2014. These grants are awarded to organizations for funding specific programs to benefit the community. The program for which the food bank received this grant is called the BackPack Program which was implemented within East Chicago schools.

The Food Bank of NWI’s BackPack Program provides 200 low-income East Chicago students with a backpack full of nutritious food every Friday during the school year. These backpacks are meant to give each student six healthy meals for the weekend until they get back to being fed by school lunch programs on Monday.

For 2015, the Food Bank of NWI once again received both a General Operating Grant and a Program Grant from FEC. However, this Program Grant will benefit the Senior PAC program.

The Senior PAC program provides a 40 pound box of healthy food to low-income seniors in East Chicago each month. Last year, the program served 100 senior citizens, however, with the receipt of the FEC grant, the Food Bank of NWI plans to increase that number to 200. Also, a portion of the funds from the grant will be used to purchase a refrigerated truck so the food can be delivered directly to the senior citizens’ homes. This year’s Program Grant will allow the food bank to do more good work than ever before for the people of East Chicago. 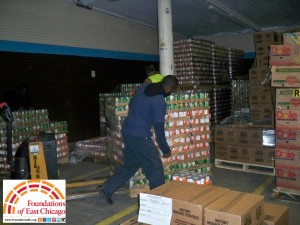