In today’s world, young girls are under a lot of pressure from peers, the media and themselves. All of these forces are telling them they have to look, act or think a certain way in order to be of value. Girls on the Run International has been working to counter these negative influences in cities all across the country for years. Now, they are able to do so in East Chicago, Ind. as well.

Girls on the Run of Northwest Indiana is the local branch of the international organization. Young girls living in Lake, Porter and LaPorte counties can sign up to participate in a 10-week session that teaches self-confidence, healthy habits and community involvement through outdoor activities like running.

Traditionally, the signup fee for participation in Girls on the Run of NWI is $150 per session. However, in an effort to make the program available to all girls, regardless of family income, the organization has developed an income-based payment program. This has made it possible for girls in low income communities, including East Chicago, to be involved with Girls on the Run. In fact, over the past two years, nearly all East Chicago participants qualified for the lowest signup cost of $10 per session.

While this has allowed many girls the opportunity to experience the benefits of being part of Girls on the Run, the dip in funding from participant fees has put the organization in a financially-tight spot. However, Foundations of East Chicago (FEC) was able to help.

FEC is a nonprofit organization that provides grants to other local groups who are doing positive things for the people of East Chicago. To keep Girls on the Run of NWI running in East Chicago for another year, FEC granted the organization an award of $15,000. 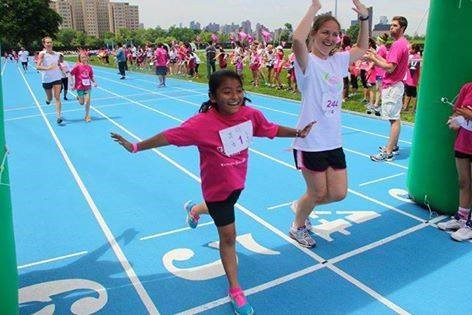