“This year, we are awarding the highest amount of scholarships in the history of the Foundations of East Chicago,” said Tereka Boone, Educational Programs Director for FEC.

FEC awarded four types of scholarships at the reception. High school students each received either $3,000, $4,000 or $5,000 in four-year renewable awards while 29 adult students, or those who are returning to college after taking some time off, received FEC non-traditional scholarships in the amount of $1,500 each. None of the students knew the amount of the scholarship they would be receiving until they arrived at the ceremony.

The reception began with hors d’oeuvres at 5 p.m. in the Discovery Ballroom at  Ameristar Hotel and Casino in East Chicago. The ceremony, which honored the students and featured three Words of Encouragement speakers offering recipients congratulations and advice, followed.

“It was exciting to just spend time with my classmates and receive our awards together,” said East Chicago Central senior Aaron Ramirez. Ramirez received a $4,000 FEC scholarship.

FEC has been awarding scholarships to East Chicago students since 1998. In total, the organization has distributed over $7 million in scholarship money to approximately 1,000 East Chicagoans.

“I was most looking forward to the excitement of the students when they realized the amount of scholarships they had been given,” said Rosa Peña, Executive Director of FEC.

FEC is a nonprofit organization which awards scholarships to students and grants to community programs. It receives its funding through an agreement with Ameristar Hotel and Casino that dates back to the inception of the Foundations. FEC receives 1.6% of the casino’s annual revenue to be used on projects and programs that give back to the people of East Chicago.

To learn more about the FEC scholarship program, visit www.FoundationsEC.org. 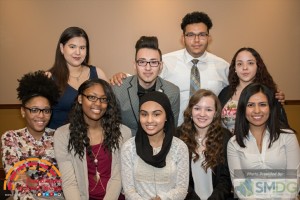